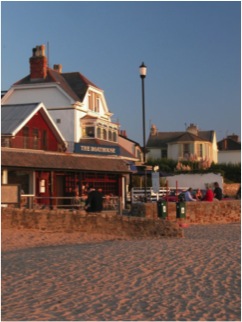 As usual, the appalling weather coincided with the arrival of guests. In this case, it was the outlaws fresh off the ferry from their eight months vanning around Spain and Portugal and struggling to adapt to the drastic fall in temperature combined with high winds and pelting rain. How were we going to distract them? There was only one thing for it – go out for lunch.

We headed west, over to The Boathouse in Instow. One silver lining to the dark clouds bunched over us was finding a parking space not far from the restaurant. (But on a dry day, when the front can be solid with cars from sunrise to sunset, it’s only a short stroll from the cricket club car park.)

Being at the northern end of Marine Parade gives it long views out to the crashing waves on Bideford Bar, while the emergency access to the beach opposite means no parking and so uninterrupted views across the Torridge estuary to Appledore and Saunton Sands. If you’re lucky, as we were, you’ll be able to enjoy this fine view from one of the few tables by the window. And Simon was able to initiate his Dad and Stepmum into the joys of counting the number of buses which serve this little pocket of coastline – as pub quizzers will already know, you can catch a bus here which will drop you in Cleethorpes twelve hours later, if the fancy ever takes you!

Not surprisingly, given its name, the speciality at The Boathouse is fish, and the decor complements that with a jolly seaside theme. From the striking display of glossy surf boards on the ceiling as you enter, to the ice-cream coloured bunting strung across the walls, it all looks fresh and appealing.

The same could be said of the dishes. The specials on the blackboards included roast monkfish in Parma ham;  baked Lundy crab;  and locally caught lobster – although the latter at £25 a pop was never going to tempt the folk from Yorkshire! On the regular menu you’ll find the usual prawn and salmon offerings as well as Simon’s choice of starter – New Zealand green-lipped mussels grilled with smoked bacon and Worcestershire sauce, pronounced “delicious”.

Carnivores are also well catered for. On the day we visited, specials included rack of lamb;  duck breast with a mango and blackcurrant sauce;  Cajun spiced chicken;  and steak, kidney and ale pie. Vegetarians don’t get a raw deal either. Choices included spinach and ricotta cannelloni;  avocado and mushroom bake;  and mushroom stroganoff.

We all plumped for the fresh fish. My starter of potted crab on a pecan and walnut salad was fashionably presented in one of those bowls that resembles an upturned hat. Dave and I both enjoyed the fresh chunks of crab on mixed salad leaves, but it was only after the last forkful disappeared that we realised it had been missing the extra crunch of the nuts. On querying this with our waitress we were informed that the sprinkles which had decorated the wide brim of the bowl were in fact the said nuts. Other people, she mused, had made the same comment.

Dave and I agreed on the main course too – a perfectly cooked fillet of John Dory with roasted Mediterranean vegetables accompanied by new potatoes – again, very tasty. But Simon damned his Ray with faint praise, proclaiming it just “fine”. We washed this down with a bottle of something Italian and white, but it was also possible to buy wine by the glass, starting at £3.50 – of little relevance to Sheepwashers, I know. And I’m afraid I can’t comment on the desserts as we called it a day at that point. I can report, however, that the loos were exemplary.

Overall, the service was polite and efficient, and our waitress was unfazed by Barbara’s necessary questions about whether or not there was flour in the dishes. But sadly, I think it lacked a bit of personality, a bit of warmth, that you tend to come across much more in Devon than many other places.

The price for the four of us with water and wine was £105. Given that the portion sizes were pretty decent, we felt it wasn’t bad value and headed back outside armed and ready to face the cold grey Devon summer’s day.

By this time, the rain had stalled and the wind dropped slightly, so we ventured a walk along the front before heading back to Sheepwash for our coffees. As the effects of the wine were beginning to wear off, we hit them with a big glug of caffeine and large slabs of coffee and walnut gluten-free cake. Simon stuck the MotoGP on the telly and settled on the sofa with his Dad while Barb and I got stuck into a couple of mags. What weather?