Everyone in the village will have seen the big re-thatching job going on in South Street, where three houses in a terrace on the east side are being re-thatched by Peter Bright and his wife Yan Ping. This unusual couple are testament to the fact that internet dating can work – they have now been happily married for seven years. 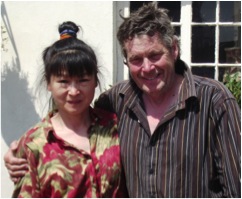 They live at Petrockstowe, and many of you will be aware that their own thatched roof caught fire last year, so they have been unable to live at home since then. But they should be able to begin re-thatching it in the next few months, and move back home later in the year.

They had more bad luck last year, when Peter suffered his most serious accident in twenty-five years of thatching, when he fell off his neighbour’s roof. He is philosophical about it – it was bad luck to fall off, but very good luck that he didn’t end up crippled or dead!

Yan Ping comes from south China, and they return there regularly for holidays. Her family were a little wary of Peter at first, because thatch is only occasionally used in China, not for houses, but on animal shelters, such as pigsties, and a thatcher is considered a very lowly occupation. But he was able to explain the difference in this country, and all was well.

Yan Ping has now also learned to thatch, and works with Peter. Because of the cultural difference in the status of thatching in China, this means that she is the only Chinese woman thatcher in the UK, and possibly the only one in the world!

Thatch was the only roofing material available to the bulk of the population in most of Europe and the UK until the late 1800s. The commercial production of Welsh slate began in 1820, and the improved mobility brought by canals and then the railways meant that other materials became more available. However, the number of thatched properties actually increased in the UK during the mid-1800s, as agriculture expanded, but then declined again at the end of the 19th century because of agricultural recession and rural depopulation. Gradually, thatch became a mark of poverty, and the number of thatched properties steadily declined, as did the number of professional thatchers.

Thatch has become much more popular in the UK over the past forty years, and is now considered a symbol of wealth rather than poverty. It’s popularity is increasing because of the renewed interest in using more sustainable building materials and preserving historic buildings, and there are now approximately a thousand full-time thatchers at work in the UK. 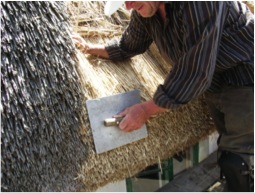 This highlights one of the contradictions in current thatching. What should be a very eco-friendly, sustainable method of roofing is made much less so by the fact that much of the material is imported – even the wooden spars, used to peg the thatch in place, are imported from Poland because no-one in the UK seems to want to make them.

(So if any enterprising villager reading this is looking for a new business idea, it would be worth considering making spars. They are just split hazel or willow branches, part-broken with a twist to form a hairpin V-shape, roughly pointed at the ends. A skilled person can make up to 2000 a day.)

Technological change in the farming industry has had a significant impact on the popularity of thatching. Medieval wheat grew to almost six feet (1.8m) tall in very poor soils and produced durable straw (reed) for the roof and grain for baking bread. The availability of good quality thatching reed declined in England after the introduction of the combine harvester in the late 1930s and 1940s, and the release of short-stemmed wheat varieties. The increasing use of nitrogen fertiliser in the 1960s and 70s also weakened reed and reduced its longevity.

Since the 1980s, however, there has been a big increase in reed quality as specialist growers have returned to growing older, tall-stemmed, “heritage” varieties of wheat in low input/organic conditions. However, in the EU it is illegal under the Plant Variety and Seeds Act 1964 (with many amendments) for an individual or organisation to give, trade or sell seed of an older variety of wheat (or any other agricultural crop) to a third party for growing purposes, subject to a significant fine. Because of this legislation, thatchers in the UK cannot obtain top quality thatching reed grown from traditional, tall-stemmed varieties of wheat. 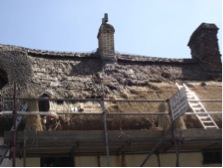 It is impossible to say how long it will take to thatch a roof, as there are too many different factors to consider – it’s a bit like asking how long is a piece of string. Peter aims to lay up to a hundred bundles of reed a day, and works in just about any weather – it doesn’t have to be dry. 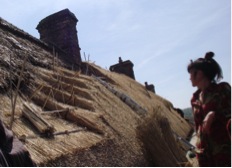 Good thatch will not require frequent maintenance. In England a ridge will normally last 8–14 years, and re-ridging will be required several times during the lifespan of a thatch. The thickness of a layer of thatch decreases over time as the surface gradually turns to compost and is blown off the roof by wind and rain. A thatched roof can be thought to be nearing replacement when the horizontal “sways” and hair-pin spars that fix each course become visible near the surface.

Good quality thatch can last for more than 45–50 years when applied by a skilled thatcher. Traditionally, a new layer of reed was simply applied over the weathered surface, and this “spar coating” tradition has created accumulations of thatch over seven feet (2.1m) thick on very old buildings. Over 250 roofs in Southern England have base coats of thatch that were applied over 500 years ago, providing direct evidence of the types of materials that were used for thatching in the medieval period. (Almost all of these roofs are thatched with wheat, rye, or a “maslin” mixture of both.)

If you have a thatched roof, Peter says it is very important to find the right person to maintain it. Contrary to popular belief, there are no regulations governing thatching, only recommendations, and it is possible for just about anyone to call themselves a Master Thatcher, so the title alone is no guarantee of ability. Always investigate previous work and get recommendations from past clients.