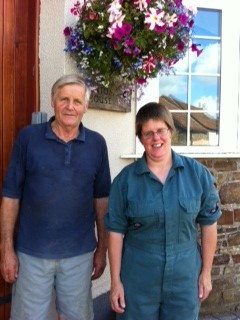 It may seem strange to be talking about turkeys in the middle of summer, with the temperature in the 80’s, but for Michael and Annie Pedrick, turkeys are a year round business. The Pedricks have been rearing turkeys at North Road Farm since they restocked the farm following the Foot and Mouth outbreak in 2001. They are contract rearers for Shoby Poultry, a small but expanding family business based near Melton Mowbray.

The Pedricks rear some 40,000 birds a year, in batches for Shoby. The poults (young turkeys) arrive at the farm as day-old-chicks and leave at 9 weeks, when they are moved on to other farms for finishing.

Rearing turkeys, says Michael, is much more difficult than rearing pullet chicks and the trickiest part of the turkey production process is the first nine weeks. The most serious disease of turkeys is Blackhead, a protozoan disease of poultry that attacks the liver. Until about 10 years ago a drug called Emtryl was the main way of controlling Blackhead but when this was banned, together with other antibiotics, the only effective way of controlling Blackhead was emphasised even more – high standards of hygiene and bio-security (hence, the notices on the gates).

It is not only infectious diseases which cause problems for the turkey producer. A turkey’s worst enemy, it is said, is another turkey. They are likely to suffocate each other by crowding, or peck each other to death.

So good management is everything, and particularly when the pouIts first arrive at North Road Farm they have to be kept under almost constant observation.

Annie inspects them every few hours day and night. It’s a lot of hard work, but very rewarding. They are helped by Shoby Poultry whose fieldsmen visit on a weekly basis to check and weigh the birds. Shoby also provide their own catching gang, who catch through the night, which eases the workload.

Another problem with the turkey industry is our eating habits. In contrast with some other countries, we only tend to buy turkeys at Christmas and because the size of bird that households want varies, there is a demand for both males (stags) and females (hens). For the rest of the year the demand comes mainly from the catering trade and particularly from the pub carveries, which want very large birds. All of the turkeys that the Pedrick’s rear are stags and they go into the catering trade. Most of the females produced by Shoby are exported, major destinations being Greece, Holland, Austria, Germany and Spain.

So, the next time you see a Shoby Poultry lorry going through the village it will be heading to or from North Road Farm, and there will be over 2,000 turkey poults on board.