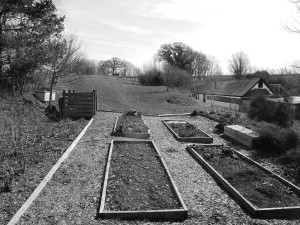 Back in the time of lazy British summers when I was about to leave my parents’ abode, it was the weeping willow in the garden that was the clincher regarding the acquisition of 38A Woodside, Wimbledon, my first domain of independence. Being a complete gardening ingénue at that time I didn’t see the incompatibility between a 45-foot suburban garden and Salix babylonica.

Since that time, and the ultimate inevitable demise of the Salix, my gardening nous has hopefully taken a turn for the better. The peace and tranquility of the lovely garden I eventually created having been blighted by the arrival of a neighbouring prep school with unusually vociferous students, I was driven into retirement and discovered Musselbrook Cottage in the autumn of 2009. An ambition to create a garden with plants and features of which I had often dreamed would be fulfilled by the largely undeveloped grassland of Musselbrook Cottage.

Having left Wimbledon (my home for the entirety of my youth and working life) at the end of March 2010 I set about the makeover of my 0.9 of an acre of Devon terrain. Extensive soil samples taken (generally slightly acidic clay) and the garden layout planned, I was very fortunate to enlist the services of my neighbour, Paul Wilton, and his digger, and the relatively featureless flat sloping ground soon became a varied landscape of pleasing hummocks and nascent ponds. (The hummocky element in the Mediterranean garden was enhanced after a visit to Keith Wiley’s wonderful “Wildside”.) 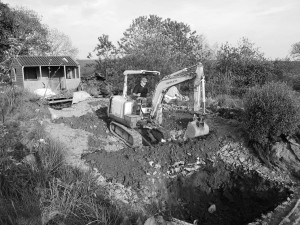 A frenzy of plant buying then ensued, but the harsh winter of 2010 proved disastrous for many of the choice plants I had lovingly and laboriously planted. The soil was unusually hard and rocky, and a mattock was the only tool capable of creating a planting hole, unless I happened to be working in areas turned over by the digger. Having learnt this valuable lesson early on, I could now proceed to make plant purchases in a more informed way.

Various elements combined in the creation of the garden design: a love of nature, wildlife and informality; an influence from certain features of Japanese gardens and culture; and everything located to optimise photographic opportunities. A contoured path leads you around in the manner of a Japanese stroll garden, where one’s journey is enhanced by elements sited at strategic locations. These include seven ponds, streams, a wildflower meadow, Mediterranean garden, stone circle, menhir, rocking stone, chamomile seat and clock golf area. The Japanese idea of “borrowed landscape” was also easily incorporated as the sloping site naturally gives rise to distant views, particularly in winter. A love of rare and unusual plants informs my planting, and I have attempted a natural flow between “wild” and more manicured areas. 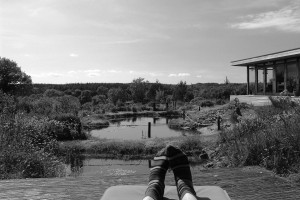 The studio and koi pool

I am hopeful that my target to complete the garden with small nursery for public opening within five years will be met (and in this endeavour I’m particularly grateful to Kerensa Wilton for her invaluable help from July to November 2012), with the last, and most exciting project, an authentic Japanese garden. 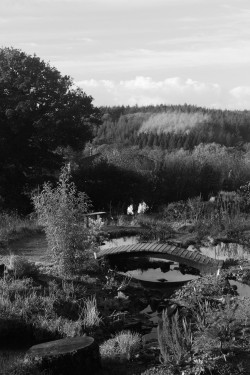 The highlight of my year is when I holiday in the Mediterranean in late April/May when orchids and many wild flowers are at their peak. The great sensory assault of these adventures, with floral beauty, herbal fragrance and bird song creating an intoxicating experience, is what I’m ultimately attempting to recreate in my own backyard. If this is achieved I will have a haven to fulfil my great love of nature until my dying day.