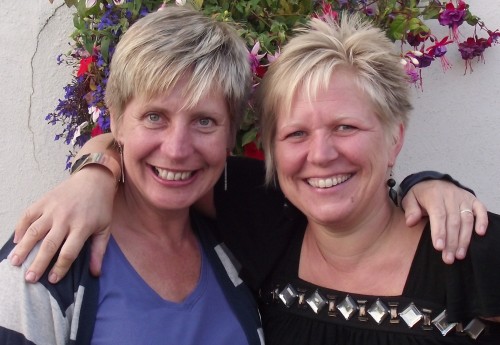 In the four years since Bee Draper and Chrissie Vincent set up in partnership they have spread their decorating magic over more than a quarter of the properties in Sheepwash.

Chris and her family moved from Newbury to Sheepwash in 2000. Chris had been a COBOL programmer (or ‘in IT’, as they say), and in her spare time was an enthusiastic and skilled amateur decorator. In Sheepwash the family rented Wooda Farm for about 6 months, before buying Mermaid House on the Square in January 2001.

Chris managed the Sheepwash Community Shop and Post Office when it re-opened in July 2001 and she was also the postmistress. She ran the venture for the next 5 years before handing over to Chris White in 2006.

Bee and her family had holidayed in this area for many years before selling their house in Nottingham and moving to live in Sheepwash in 2004. Back in Nottingham Bee had run her own decorating business. The family were planning to buy a house in Bradworthy, but that fell through, so for their first 18 months in Devon they rented Farnfield in North Street, and then bought Cross House in South Street in 2006.

Bee and her husband, Gary, set up a Wedding Car business, which they ran successfully on a part-time basis until they sold the cars in 2009. Since moving into the area Bee had also been doing some decorating work – one of the jobs was to help Chrissie decorate Mermaid House.

Together the girls undertook a number of projects, and after a short time they realised that they had the beginnings of a viable business. They entered into a partnership agreement and much time was spent thinking of an appropriate name for the business. Some wag suggested The Painted Ladies, but this was rejected as being too risqué, so they settled on the name that we know today – The Painting Ladies.

Carly Tucker, who had recently qualified as a Graphic Designer, helped them to design their logo, based on the Painted Lady butterfly, and fliers and leaflets advertising interior and exterior decorating were produced. These were distributed in Sheepwash, Shebbear, Hatherleigh and Okehampton. They also had an advertorial in Admart and, from the start, the Painting Ladies advertised in the Sheepwash Chronicle.

The fliers, leaflets and limited adverts did the trick. Since that time the Painting Ladies have gone from strength to strength, decorating shops and factories in Okehampton (for example, Mason and Judge, Angel and LAS Aerospace), pubs (like The Half Moon), the primary school in Highampton, and, as we know, the interiors and exteriors of many houses in Sheepwash and the surrounding area.

The Painting Ladies now advertise only occasionally, most of their work coming by word of mouth and repeat business. What’s their recipe for success? Perhaps singing along to Radio 2 VERY LOUD..? More likely the quality of their work coupled with their cheerful approach.