Sheepwash is beautiful in the spring, particularly when we get the sort of weather we have enjoyed during the last six weeks. Part of the pleasure is to see the fields filling up with lambs and spring-born calves, and the meadows around the village have now got plenty of both.

If you are walking in the fields to the north of the parish it is likely that these will belong to Ian and Jenny Harris. Of course, farming is not the only Harris enterprise – Jenny runs a catering business serving family celebrations and company hospitality events.

Ian and Jenny live in Pretoria House, so named because a neighbour’s father, Mr Newcombe, fought in the Boer War. 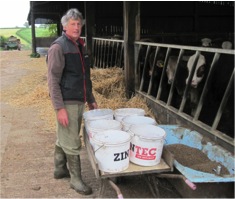 Ian was born in the village, as was his mother. His father was born in Merton. Jenny is a farmer’s daughter from near Torrington, and is the youngest of thirteen children, twelve still living – what a lot of birthdays to remember! Ian, in contrast, is an only child.

They have two daughters, Katie and Emma, who are both continuing with the family farming lifestyle. Katie is married to a farmer, and Emma is shortly to follow suit and also works for an agricultural consultancy company – Promar International.

Unlike most farmers, Ian and Jenny did not inherit farms from their parents. Ian’s father was a farm worker in the village and Jenny, being one of 13, did not inherit a farm either. Ian started work as a farm worker, first for Michael Pedrick and then on a part-time basis for the Gilbert family at Newcourt Barton. At the same time he worked nights at Harper’s Feed Mill in Holsworthy and he started in farming in his own right by buying sixteen ewes at Hatherleigh market and renting some grass keep. Gradually the farm business expanded by renting and buying more land, and the Harris’s now farm some 270 acres. 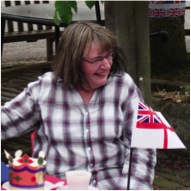 Meanwhile, Jenny embarked on a career in catering at Edgehill and Shebbear Colleges, and subsequently at the Half Moon. Nowadays, through her catering business, Jenny does an average of about three or four events a month (for example, she did most of the catering for the recent royal wedding celebration in the village Square). She does a lot of business with farming people, and customers are attracted by word of mouth, so the two family businesses fit together to some extent.

A major event in farming in Devon was the outbreak of foot and mouth disease in 2001. The Harris’s stock were the second to be diagnosed in the county. All were destroyed, including a valuable pedigree Charolais cow and calf, which they had just bought. It was an awful time for a farm-based village like Sheepwash. Everybody was affected by the shutdown of the countryside.

The farm business is now based at Middlecott .The main enterprises are a suckler cow herd and two flocks of breeding sheep. There are thirty suckler cows which are Hereford crosses and served by a Charolais bull. The cows calve in the spring. The bull calves are not castrated and are sold when they are about twelve months old – current prices are about £1,000 to £1,100 each. The heifers are sold at about two and a half years old, when they are worth between £800 and £1,000. In addition to the home-bred calves, store (half-grown) cattle are purchased and taken through to finished weight.

The Harris’s beef is produced for Tesco’s. They receive an assured price which is higher than the general wholesale price, because high standards of animal welfare and food safety have to be maintained to be an approved Tesco supplier, and the farm is inspected to ensure that this is the case.

There are two sheep flocks, numbering altogether some 350 ewes. One flock lambs in January and the lambs are sold in May and June (when lamb prices are at their highest), and the second flock lambs in the first week in April.

There are a large number of sheep breeds in the UK and most lambs that are produced are crosses between one breed and another. The Harris’s have Suffolk, Texel and Charolais rams and the ewes are themselves crosses between Suffolks and Mules. The aim is to have fathers which produce good quality carcasses and mothers which are thrifty, bear plenty of twins and triplets and produce plenty of milk for the lambs.

The lambs go to Waitrose, and the same sorts of conditions apply as to the beef. Sheep meat prices, whether mutton or lamb, are at an all time high, mainly because of a high level of exports and reduced availability of New Zealand lamb, much of which now goes to the Middle and Far East.

Ian and Jenny do all of the work themselves – there is no hired labour. It is hard work, with long hours and, at times, like early lambing in January, conditions can be very bleak, and cows often need assistance with calving at the most inconvenient times! An added complication is that the Harris’s live in the village and the farm is some three miles away at Middlecott, so it is not possible to just pop out of the back door to check on a calving cow.

One of Ian’s regrets is that it would be far more difficult for a young person today to do what he and Jenny have done – entry into farming without a considerable amount of capital backing or an inherited farm is virtually impossible. When agricultural land does come onto the market it is nearly always purchased by existing farmers rather than new entrants.

Despite the long hours, and frustrations when things go wrong, the Harris’s clearly enjoy what they are doing and the way in which they have built up their businesses over the years.